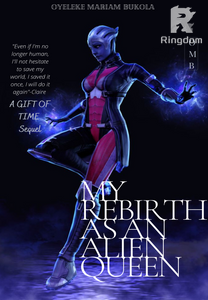 My Rebirth as an alien Queen

She had gone through it before, the confusion and trauma of having a previous life, she had survived it, lived through it and died by it but this time it was worse. Claire Chadwick woke up in the body of a royal defender alien. She was the most powerful in the alien world but the only problem was she didn't want it. She wanted death, she didn't want it.

Having powers was cool; having an alien body wasn't fun. Claire struggled to accept herself for who she now was but couldn't but with the help of her king and husband she started to adapt to it but when she realized the only person who she knew so well was responsible for her predicament she went rogue, learning Hero who had saved her planet earth in her previous life caused her rebirth made her furious.

She fled, she fled back to her home hoping to find refuge as well as her love who had died with her but she was no longer who she wanted, no longer their kind, she wasn't that welcomed not even by her family, she had missed them and had so much to tell them but her presence wasn't needed but before she realized it wasn't worth it, she was captured and experimented on.

Hero mated to her couldn't rest and seek her. He did find her but his own world was in grave danger. Most of the humans now knows of their existence and seek their destruction and not just that. Their old foe was back...the old prince would stop at nothing to ruin earth again. After rescuing Claire she has to decide, she needed to decide whose side she was going to fight on, her previous home or her new home? Would she escape the wrath of the ex-Alien prince? Would she be able to protect her mate as well as her earth family? Would she survive being a queen of a whole race? Only time will tell? But what Claire didn't sign up for was carrying an Alien baby in the middle of a galaxy war, now she has four things to protect, her two worlds, her mate and her baby!

Will she be able to protect all she wanted to protect or will she have to sacrifice one for the other...just click on the love button and read to find out.

Crucial help comes at a very crucial time, yeah...that was what Prince was to me...it was like he saw it coming and decided to come to aid, it wasn't even his time to be born yet but he defied that and come way earlier than he was supposed to like he sensed he sensed it was the perfect timing and I was really glad but what I wasn't……