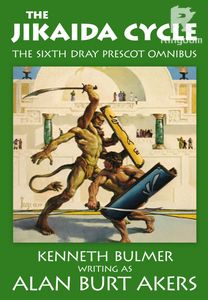 Four hundred light years from Earth, Kregen is a marvelous world, peopled by wonderful beings, filled with light and clamor and furor of life lived to the hilt. But Kregen has its darker side, where horror and terror bind innocent people, where sorceries rend reason, where injustice denies light.Here, in the unforgiving yet rewarding world of Kregen, struggling through disaster and triumph, Dray Prescot has made his home. He has acquired a number of titles and estates but now the people of the island empire of Vallia, which has been ripped to shreds by ambitious and mercenary invaders, have called on him to lead them to freedom as their emperor. Reluctant to accept the imperium, he shoulders the burden because, rightly or wrongly, he sees this as the lesser evil...

[6] It is not necessary to understand how to play Jikaida to appreciate what follows. Dray Prescot relates in detail the description and rules of the game. A brief description of Jikaida is given at t……