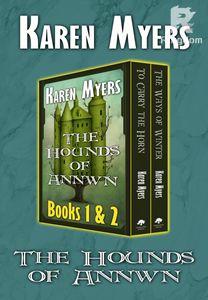 AN ENTIRE KINGDOM BUILT AROUND A SUPERNATURAL NEED FOR JUSTICE, ENFORCED BY THE WILD HUNT AND THE HOUNDS OF HELL.

What would you do if you blundered into a strange world, where all around you was the familiar landscape of the Blue Ridge Mountains of Virginia, but the inhabitants were the long-lived fae, and you the only human?

George Talbot Traherne stumbles across the murdered huntsman of the Wild Hunt, and is drafted into finding out who did it. Oh, and assigned the task of taking the huntsman's place with the Hounds of Hell, whether he wants the job or not.

The antlered god Cernunnos is the sponsor of this kingdom, and he requires its king to conduct the annual hunt for justice in pursuit of an evil criminal, or else lose his right to the kingship, and possibly end up hunted himself.

Success is far from guaranteed, and no human has held the post. George discovers his own blood links to the fae king, and he's determined to try. But Cernunnos himself has a personal role to play, and George will have to sort out just why he's the one who's been chosen for the task.

And whether he has any chance of surviving the job.

Find out what it's like to live in a world where you can help the Right to prevail, even if it might cost you everything.

The Ways of Winter: Book 2 of The Hounds of Annwn.

TRAPPED BEHIND ENEMY LINES, CAN HE FIND THE STRENGTH TO DEFEND ALL THAT HE VALUES MOST, OR EVEN JUST TO SURVIVE?

It’s the dead of winter and George Talbot Traherne, the new human huntsman for the Wild Hunt, is in trouble. The damage in Gwyn ap Nudd's domain reveals the deadly powers of a dangerous foe who has mastered an unstoppable weapon and threatens the fae dominions in both the new and the old worlds.

Secure in his unbreachable stronghold, the enemy holds hostages and has no compunction about using them in deadly experiments with newly discovered way-technology. Only George has a chance to reach him in time to prevent the loss of thousands of lives, even if it costs him everything.

Welcome to the portrait of a paladin in-the-making, Can he carry out a rescue without the deaths of all involved? Will his patron, the antlered god Cernunnos, help him, or just write him off as a dead loss? He has a family to protect and a world to save, and little time to do it in.