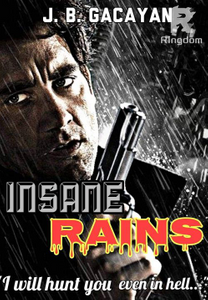 His life should be a happy-rendering married man when he planned to marry Grace, however, things went pitfalls after his father encountered the lord of cocaine Mafia.

His name is Billy Domingo and his room was flooded with darkness. The man who had known someone was jolly, basically kind, impressively brilliant became what he feared of - being alone and unhappy. He looked pale and sick; his eyes adjusted in the dark. He was killing himself slowly and painfully. He lost his physique and became no one. He condemned himself and drowned his heart in sorrow and pain brought by the heart-rending mishap. The family he had called had already gone and left him lonely. Breathing with no life, a lying corpse - he felt for now. Billy suffered from depression.

"You've to rise up and face the rains." Grace said in tears.

Investigation said, "It was unavoidable to happen like this to someone like Major Ben who was under the narcotic department. They are in life-death situation because they are fighting bigger persons. However, what happened to all of you is not connected or even involved to your father. It is an accident because of your negligent driving."

Until he found out the truth - the anomalies of the government and the conspiracy of controlling the nation to execute the agenda of the one-world government.

Until he found out the real reality of his totality and the real story of the accident, he had hatched plans to revenge - to avenge for one life...one man..one woman...one child...one more,. and the time that was corrupted to him...

Until the time had come for him to crush the head of the serpents in the government, and the lord from the factory of the World - Red Dragon...

"It was already three months when Grace gasped for breath but it is still retaining, roaming in my head. I am afraid of losing my only daughter. I can't Bil." Melanie brought out the issue to Billy as they were sitting waiting for the cups of coffee to come. She held his left hand which was laid on the table, and had told him to leave everything……