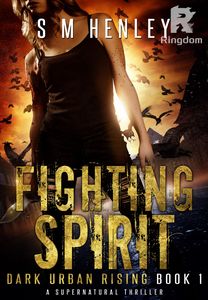 A father in Hell, a dead lover, and a demon gangster on her tail. Today is the best day of Tazia’s life.

Anastasia Savoy’s had a hell of a time. Literally. She’s been stuck underground since the end of the last Demon War. One hundred years holed up in her father’s miserable company, only permitted to run a few guns, take a few contracts, and collect the blood money. She’s been a model daughter. But now she’s free. Well almost.

With the world brought to the brink of perdition, all Tazia wants to do is pick up her cash and get outta Dodge. Then a psycho angel interrupts her plans and instead of a life of tequila on the beach, she’s forced into an alliance to save the demon who was her jailer. It sickens her. But if Tazia refuses, not only will she die, she’ll put those she loves at risk too…

Tazia is a smart-mouthed anti-heroine who attracts trouble like a magnet, and gives it back—in spades. Fighting Spirit is her first adventure in the Dark Urban Rising trilogy. It is a supernatural thriller set on the streets of modern-day Turin, London, and Detroit. It treads lightly in the darkness, with not a small amount of blood and gritty humor.

“You can’t move that way around the board, Billy, I keep telling you. I may be crazy, but I still remember how to play this game.” Tazia shook her head, freeing the strands of hair that she’d only just placed behind her ears, and gave Billy a little smile.

“You’re not crazy, love!” He squeezed her leg and laughed.