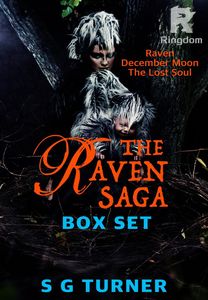 “I want to start by saying how epic this book was! I"m a teenager (I"m using my mum’s account) and I felt this is (almost, it"s definitely in the top 3) the best book I"ve read"

"Refreshingly different from the usual YA novels"

"There are so many feelings you want to get back to. With books I want that Twilight feeling back, that Harry Potter feeling-and RAVEN gives it! I"m so happy I get to look forward to a series that I love again"

"I was gripped from start to finish. This book is a must for any Twilight fans out there. Raven has everything you expect from a fantasy novel and more"

"...the perfect book for the young (younger) adult reader who enjoys the supernatural. It"s easy to read, no s*x or horrible violence, so it"s very suitable for even younger readers"

Shape shifters, witches, vampires, werewolves, werecats, ghosts…. these are just some of the creatures you’ll find hiding in plain sight in a small Canadian town in British Columbia. A town that is about to welcome a girl from England. A girl whose parents have mysteriously vanished. A girl whose life is about to change beyond all imagination…

After the inexplicable disappearance of Lilly Taylor"s parents, she has no choice but to move to Canada where she unravels some frightening yet intriguing family secrets...
Her whole life had been based on a lie. Lilly had grown up in a loveless home with a father who she had barely ever seen and a mother who was... well, not very motherly.
After they mysteriously disappear without a trace, Lilly is sent to Canada where she finds a whole new way of life. A life filled with love and people who care for her. But that"s not all she discovers, Lilly also finds out that she isn"t who, or what, she thinks she is.
Lilly has a very special ability and it"s just a matter of time before her true self starts to shine. And when it does, her life will never be the same again.

What would you do if you found out you’re actually a descendant from a family of witches? And your best friend, who now lives on another continent, is in extreme danger from one of the world’s most evil vampires? Would you do everything in your power to keep her safe?

This is the very question December Moon must answer. But first, she must delve into her family history and find out the truth about who she really is, and where she comes from. Questions her quirky, yet dead, grandmother might be able to answer…

When December Moon starts hearing strange voices in her head, it becomes clear that someone is in danger. But who - and where - is he?

Best friends December and Lilly have got their work cut out for them. Not only are they desperately trying to figure out the identity of the Lost Soul, and track him down, they"ve also got to investigate why Powell River"s newest red-hot resident has got all of their men falling at her feet.
But when they learn that the Nephilim might be involved, it becomes clear that they"re ALL in extreme danger...

Mr Parker never shouted, not at anyone.

All the kids looked up in shock, even the big bullies who resided at the very back of the classroom. 'Leave the poor girl alone,' he said as Daisy gently closed the door behind her.

She glanced through the window and smiled at him gratefully before turning her attention back to Mrs Goodyear.