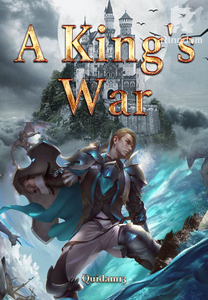 Another war is on the horizon.

The Ruthless King has conquered many kingdoms and declared war upon the world. Using magic and power that no one can defend against, he's built his empire on the blood of the innocent that stood in his way.

He goes by Ver. He was the crown prince before his kingdom fell and his parents were killed by the Ruthless King. Now he's the rightful king, forced to live in the shadows of his own kingdom until he can retake the throne.

She goes by Raven. She is an outlaw. Living in The Outskirts and staying out of the war, she travels through the places no one dares to go and knows the secrets of the creatures that live there.

When his brother is captured and being taken to the Ruthless King, Ver will stop at nothing to save him. With the help of his friends, he sets out to save his brother and take back his kingdom. In order to do so, he needs Raven's help. Without her, he can't hope to succeed. But Raven is adamant about staying out of the war and has all but turned her back on the rest of the world.

He needs her help to save his brother and take back his kingdom. She needs his help to remind her of what she once fought for. Together they can help each other, but not without igniting A King's War for his kingdom.

I stood in the courtyard of the castle, looking out over the ruins of the battlefield. The sun was coming up, signaling a new day and for some, a new beginning. This was a turning point in the war because the king of Ralorn had fought back and had won against Zatir and his army. This was a blow to Valveronia, to its Ruthless King. Mo……