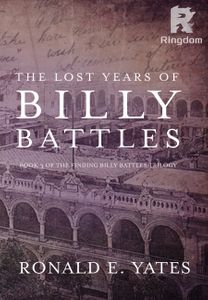 The Lost Years of Billy Battles

The year is 1914 and the world is in turmoil. In Europe, the Great War is raging. In Asia, fierce insurgencies are in progress against the colonial powers of Europe. In Mexico, a bloody revolution is ripping that nation to shreds and threatening to spill over into Texas, New Mexico, and Arizona.

Meanwhile, in Chicago, Billy Battles and his wife, the former Baroness Katharina von Schreiber, have managed to live an uncommonly sedate life for almost ten years. But, with one telephone call their tranquil world is shattered.

Katharina and Billy set off on a succession of wild adventures that will alter their lives for all time. Their new and violent world is one brimming with miscreants, secret agents, treachery, and tragedy. But most importantly, it triggers Billy's mysterious decades-long disappearance. Where is he? What happened? The answers are in The Lost Years of Billy Battles, Book 3of the award-winning Finding Billy Battles trilogy

Those plans are detailed in Book 2 of the trilogy, The Improbable Journeys of Billy Battles.