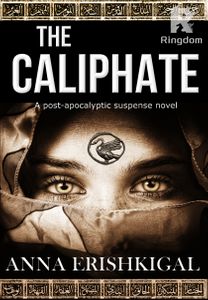 Eisa McCarthy lives in Caliphate City under the control of the radical Islamic group, the Ghuraba. Seven years ago General Mohammad bin-Rasulullah defeated the United States in a ruthless betrayal and set up their worldwide Caliphate in the ruins of Washington, D.C. The Ghuraba's supreme holy leader, the Abu al-Ghuraba, claims Eisa's father gave him control of the U.S. nuclear arsenal, a claim bolstered by the smoldering ashes of many cities and her Syrian-born mother's testimony. But after her mother is accused of apostasy, she learns her father may not be the 'martyr' the Ghuraba claim. Do the Ghuraba really possess the launch codes for the ICBM missiles? Or did her father 'lock them out' as Colonel Everhart, the rebel commander, wants her to tell the world? If she fights, the Ghuraba will kill her little sister, but if she doesn't, eventually the Ghuraba will hack in and nuke them all. All Eisa has are a string of Muslim prayer beads and a pre-Islamic myth her father told her the night he disappeared. The fate of the world, and her little sister's life, hang in the balance as Eisa sorts through ancient myth, her Muslim faith, and what really happened the night the Ghuraba seized control."The parallels the author draws between the current landscape in Syria and Iraq and a future United States are unsettling, as they portray present-day atrocities with unflinching accuracy…" —Dale Amidei, Jon's Trilogy

Did you enjoy reading this book? If so, I would be most grateful if you would revisit the website or bookstore where you purchased it from and leave a written review. Without the advertising budget of a big commercial publishing house, most small-press books do not make back the cost to produce them … unle……