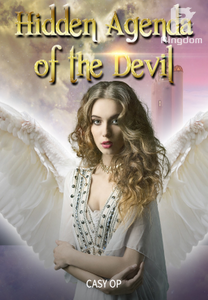 Hidden Agenda of the Devil

Gabriel was so lost in her beauty that he forgot she was the enemy and his doom.
He could feel her heartbeat and her magnificent scent that enveloped him. When she licked those naturally red lips, he wanted to suck them forever. He wanted to claim her as his, but she was forbidden fruit.
He could not have her.
This thought made him so angry that the weather started getting gloomy.
She was his to hurt, his to destroy, his to CLAIM.
It was impossible to have her, but he was God of Hell, known to bend the rules.


Samara, an angel lives on planet Oberit. She wishes to work in God's Court but her life transforms completely when a tragedy hits her hard. She loses her family, and her planet and the most devastating part is the blame is put on her. This makes her question her very existence and then she decides to confront God in His beautiful palace. But, little did she know, God had other plans for her.
God sends her to Earth to reveal the secrets behind the death of her parents and fulfill her destiny. But, going to Earth means, she loses all her heavenly powers and her identity as an ANGEL.
Her destiny is prophesied ages ago and she is the key to maintain the balance between good and bad. To fulfill her destiny, she will have to come face to face with the most powerful monster, who will change her life forever. He is none other than the God of Hell- Gabriel.
Will Samara be able to reveal the truth behind her parents' death? How will she survive on Earth? Will she be able to find Gabriel? How will she fulfill her destiny with all the ***twists and turns*** that await her on Earth?

Samara frowns at her ex-husband's dramatic reaction. After 2 years he has come into her life informing her how he wants to have her back. But what about her? What does she want?

Sitting inside the car, the Angel looks desperate to avoid confronting her husband. For the past two years, he did not pay any attention to learn whether sh……