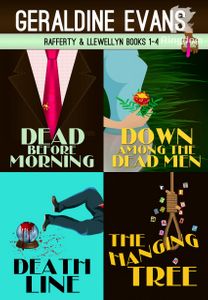 Down Among the Dead Men #2

Dead Before MorningBritish Detective Joe Rafferty and his partner, Sergeant Dafyd Llewellyn in a murder mystery involving the killing of a young woman bludgeoned beyond recognition, with no ID and found in a secure place to which she supposedly had no admission. Who is she? How has she gained access? And who was responsible for her murder?

Down Among the Dead MenBritish Detectives Joe Rafferty and his partner, Dafyd Llewellyn, must discover who murdered Barbara Longman, a woman with no known enemies. But when it soon becomes apparent that the murder has been committed by someone who must have known the victim well, the police investigation shifts to the victim's family, the wealthy and influential Shores. Rafferty suspects that Charles Shore, not a man known to forgive failure, will use his influence to damage Rafferty's career should he fail to find the murderer.

Death LineDeath Line sees the detective duo trying to solve the murder mystery, with his own crystal ball, of the famed 'seer', Jasper Moon. Gradually it becomes clear that Jasper Moon was a man of many parts, not all of them very savoury. Moon was a wealthy man but seems to have written no will; certainly, Detectives Rafferty and Llewellyn can't find it. The detective duo must take their murder investigation back through the years to the victim's youth to answer that question: 'Who did it?'. And Rafferty fears that after such a long time, the evidence their murder inquiry needs will no longer be there to find.

The Hanging TreeThis murder mystery involves the detective pair in the case of the vanishing hanged man. But when the hanged man turns up in Dedman Woods for a second time, the British detectives are able to confirm that he is a man many had reason to hate. Because Maurice Smith, charged years earlier with four child rapes, had escaped on a legal technicality. Detective Rafferty feels ambivalent about the case from the start. Not sure his desire to solve it is strong enough, he has to fight the feeling that natural justice, in winning out against the judicial sort, has right on its side. Rafferty, caught between the law and his own sense of morality, feels this is an investigation that could cause him to demand his own resignation as a detective.

There are 18 novels in the Rafferty & Llewellyn Mystery Series

Did you love Rafferty and Llewellyn British Mysteries Books 1 - 4? Then you should read Absolute Poison #5 by Geraldine Evans!

#5 of 17 in the Rafferty & Llewellyn British Mystery Series

A Little Laughter. A Little Mayhem. a Little MURDER...