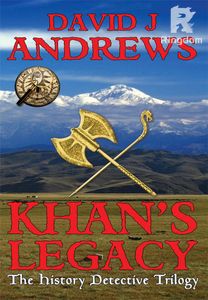 Guy Tresanton and his business partner Rose are once again drawn into a battle for survival with the Teacher. Their merciless enemy has drawn great strength from the capture of certain ancient artefacts. He now stands poised to use the power they give him to eliminate all who oppose him and seek the final piece of the puzzle devised so long ago by the man who ruled the greatest empire the world has ever known, Kublai Kahn. The Elders, a secret philanthropic organisation charged with the responsibility to maintain order in the world, join forces with Guy, Rose, their indomitable friend Monty the Bahamian policemen now working for Interpol and many others from around the world who all combine to thwart the Teacher's plans. Filled with exciting historical facts this fast paced story flies from the Caribbean, moving swiftly to the Arctic Circle through Russia , East Africa, on to Vietnam, China and eventually to Australia. Climaxing in an thrilling showdown in the Indian Ocean. Posing many challenging questions of the reader - is the Teacher really the arch villain? Are there greater forces with the even more evil intent of world domination behind him? Will Guy and his friends save the day? Seeking Kahn's Legacy we learn much about a thrilling era of history few will know of until now.

Though liberties have been taken with historical characters and events, there are a number of facts worth highlighting to help complete enjoyment of the story.

Between 1410 and 1490 New Zealand South Island was devastated by fires and a tsunami. The island lies on a fault line so it could hav……