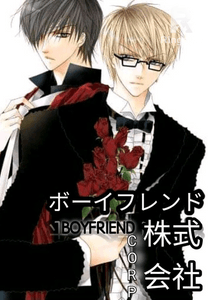 Shima Ueda (Sunday) was 8 years old when their parents got separated... And since that day,Shima and her ten-years older sister started to live together, on their own. As shima grew older, his sister started to worry and concerns his anti-social attitude.

After getting-in to his desired college, Shima decided to live on his own. Aoki— shima's older sister, hesitated and oppose his decision.

But one day, Aoki gave her blessing all of a sudden, leaving shima only one condition. Once Shima moved out, a huge package was delivered to his place. In the name of his sister, from an unknown company named " BOYFRIEND CORP." . Only to discover that inside the package, was a living man. And to sum-up her sister's condition... Shima would be living on the same roof with that guy. Hoping that shima would learn to socialize and open himself to the world.

" Sunday! Where should i put this?" Tinignan ko ang box na hawak nya.