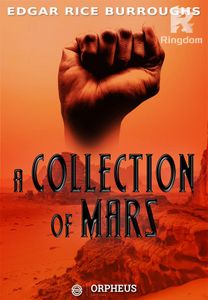 A Collection of Mars

This anthology contains five novels of the adventures of John Carter :

A Princess of Mars is the first volume in the Barsoom Series, telling the adventures of John Carter, a confederate veteran of the American Civil War, who finds himself mysteriously transported to Mars, called Barsoom by its inhabitants.

On Barsoom, John Carter will find himself in the middle of a civilisation"s war, and will fall in love with the fascinating Dejah Thoris, a princess in danger.

What side will John Carter choose, and how will he win the Princess of Mars" heart ?

The Gods of Mars is the second volume in the Barsoom Series.

On Barsoom, John Carter found love, but was transported back to Earth, unable to go back to Deja Thoris, the princess he fell in love with.
After ten years of separation from the love of his life, John Carter is sent back to Barsoom. But his arrival takes place in the worst possible location : the Valley Dor, which is the Barsoomian afterlife !

Will John Carter get out of this terrible place, and will he find again the princess he loves ?

Warlord of Mars is the third volume in the Barsoom Series.

On Barsoom, John Carter gained her lover back, Dejah Thoris, only to see her imprisoned in the Temple of the Sun. Carter learns that the entrance of the cell can be opened only once in a year.

Will John Carter manage to save the Princess he loves ?

Warlord of Mars is the fourth volume in the Barsoom Series.

On Barsoom, Carthoris, the son of John Carter and Dejah Thoris, is deeply in love with Thuvia, the Princess of Ptarth.

But she is already promised to another man, and on Barsoom, this type of engagement can"t be broken, except by death.

What will Carthoris decide to do in order to be with the Princess he madly loves ?

The Chessmen of Mars is the fifth volume in the Barsoom Series.

On Barsoom, we follow Tara, Princess of Helium, the young daughter of John Carter and Dejah Thoris. After being captured by the terrifying Kaldanes, Tara and the young man who wants to win her heart have to participate in a terrible game of life and death : the Jetan, a Barsoomian game ressembling chess, and using people as pawns.

Will Tara survive this ordeal and go back successfully to her parents ? And will she fall in love with this mysterious young man ?


You"ll find the answers to all of these questions in this Collection of Mars.