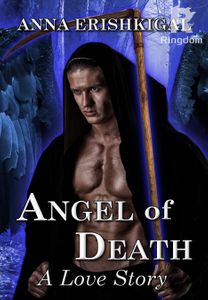 …for who would love Death?
Azrael Thanatos wants nothing more than to follow in the footsteps of his scientist mother. Sent to study humans on a wager between the Eternal Emperor and Shay'tan, he has no idea that Earth is gateway to a fiery prison. Far from home, he is befriended by Elissar, a precocious child with silver eyes. When Moloch instigates the invasion of Carthage to escape, Azrael sacrifices his life to snatch his friend from the Devourer of Children's maw.
Saved by a mysterious goddess, Azrael is given a new mission. Watchman. Roaming the Earth without shape or form, he reaps those who would help Moloch escape and drags them to Gehenna, a prison to which only Lucifer holds the key. It's a hellish immortality, for who wants to serve alongside the Fallen or exist when no living creature can survive your touch. Haunted by Elissar's death, he despairs of never finding love or friendship as time grinds civilizations into dust. For who would love Death?
Then one day a child takes his hand and lives…
Life for Elisabeth is not easy. The Angel of Death took her entire family the night a drunk driver plowed through a stop sign and left her in a wheel chair. Azrael is forbidden to interfere as she bounces through foster homes, hardship and grueling rehabilitation. Then one day he is forced to reveal he is not a figment of her imagination.
Oh, how she hates this angel who has taken everyone she has ever loved! The invasion of Iraq inspires her to join the Army as a trauma nurse, unaware that Death has fallen in love with the woman who can defeat him.
Will she take his hand a second time?
Omnibus Edition contains:
—Angel of Death
—Angel of Death: A Love Story
Children of the Fallen is a new series set in the 'Sword of the Gods' universe, taking place in the modern day.

Dumped at the altar and left without a home, Rosie Xalbadora takes a job as a governess at the edge of the Australian outback. There she meets Pippa Bristow, a sensitive child who copes with her parent's bitter divorce by escaping into a magical world of fairy queens and unicorns. Pippa's enigma……