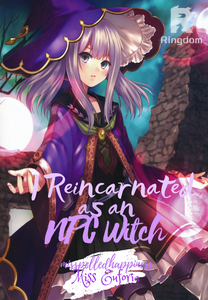 I Reincarnated as an NPC Witch

Abigail Abenson is a popular streamer, gaming content creator, and fan of an Indie-game called Faith & Fate. The game has been the soul of her channel ever since it released its early access up to the full-game development phase. The word Nightingale, her username, and Faith & Fate can never be inseparable. Even with the variety of games she played, she's still known for her Faith & Fate gameplay.

One day, she was lucky enough to get an interview with the developers of the game. They are known as The Gemini. It was the happiest day of her life. She got to meet the people that are behind the game that's been her identity for years. Little does she know it was also the day she will be dreading for the rest of her life. The interview didn't go well as she planned, well, at least for her.

Everything changed about her. She wakes up in a world that she's strongly familiar with. A world where she mostly spends her time as a coded player character. But now, she's one of its citizens, a non-playable character (NPC). She was not just a regular one, she was a witch, a Floral Witch. A fabled hero according to the game's lore.

How will she survive in this world that's under the hands and command of the people she used to look up to? Can her knowledge of the game help her at all? What mysteries will she be able to unravel? Is there something much more sinister behind these textured game assets and deeply coded characters?

The world started to flicker so bad, it was an eyesore. Everyone except the heroes started glitching themselves. The other hoarfrosts were still charging, so they didn’t have the choice but to fight back. It was absolute chaos all around. The fighters were distracted by the flickering texture that hoarfrosts have. But, it didn’t stop them from ……