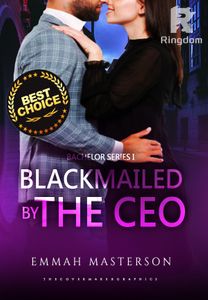 Blackmailed by the CEO (Bachelor Series #1)

Amara Georgina Williams almost had everything in her life. Beauty, wealth, and fame. But there is one thing that she can never have -- Travis Rosselli, her brother's best friend, the love of her life. Travis only sees her as a younger sister and Georgina wants to prove that she can also be the woman that he might be looking for. That she is right for him.

So she did what she thinks the right thing to do... she confessed her feelings. But Travis heartlessly told her that he can never love her and it's better if she looks for another guy. Rejected and devastated, Georgina promised herself that she will move on and forget him.

Six years after, Georgina successfully made that promise. She is now soon to be Mrs. Montero, and she can't wait to be a wife soon. She is now happy or so she thought... because her nightmare came back!

Powerful Filipino-Spanish Travis Rosselli was used to taking what he wanted and he wouldn't let a little thing like Georgina's engagement stand in the way!

The sexy magnate wasted no time in taking her away and bring her to his private Island for a*bduction and a surprise marriage proposal.

Travis was determined to marry Georgina this time before he could discover their magical night six years ago is not so innocent, not easy what he seems... so he came up with a new tactic. Blacking her before it's too late.

BACHELOR SERIES is composed of 4 books:
*Each can stand on its own*
1. Blacked by the CEO - English
2. How To Love A Woman? - Tagalog
3. How To Tame the Wild Billionairess? - Tagalog
4. How To Make the Bad Boy Mad? - Tagalog

IT’S GEORGINA'S BIRTHDAY NOW. And it was their Anniversary. Georgina felt comfortable waking up because she knew her husband would surprise her. Why not, in recent years it has been a year of surprises. She even has a present here for their anniversary. But of course she knew that Travis made it as a double effort since it was her birthday too. ……