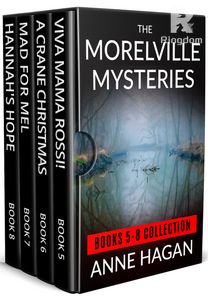 A boxed set of books 5-8 of the full length Morelville Mysteries series novels featuring Sheriff Mel Crane and Agent Dana Rossi. You get:

Does an unsolved shooting death far away from Morelville have local ties? Did a fisherman really drown or was there something more sinister afloat?

Book 6: A Crane Christmas - Is it the Christmas season or the ‘silly season’?

All Sheriff Mel wants to do is close out the year and spend a joyful first Christmas with Dana and with their extended families. She’s even hired a new detective, Janet Mason, to ease some of the workload for her and her only other detective, Shane Harding. Things were shaping up great for her and Dana for a relaxing holiday season. Too bad it just wasn’t meant to be… The local criminals want it all too and a string of burglaries in high class county enclaves have Mel and both of her detectives stymied. Throw in a bunch of disappearing dogs, some designer sheep, a lonely woman and an unsolved murder case, and the good guys are at their wits end. Meanwhile, back in tiny little Morelville, things aren’t much better; the village is buzzing over Dana’s family taking over the store but Dana herself isn’t so sure that’s a good thing. Can Mel and her team resolve everything before Christmas dinner comes out of the oven? Will Janet Mason fit in at all? Will Dana find a balance between work and family that works for her in time to enjoy her first Christmas with Mel?

Book 7: Mad for Mel Rival gangs will stop at nothing to gain sole control of the drug trade in Muskingum County and they’ve picked Valentine’s week to create a firestorm of murder and mayhem as they battle each other for supremacy.

Sheriff Mel Crane is blindsided by looting, murdering and marauding bikers at a time of year when most Harley’s are tucked safely away from the effects of Ohio winters that come rife with snow and ice. They’re rolling out, they’re out of control and she can’t stop them. On the home front, she’s feeling guilty about spending hardly any time with Dana, especially when she knows Valentine’s Day is right around the corner…or so her mother-in-law keeps reminding her. Dana just wants Mel to be safe; she has her own problems to worry about. Her attempt at novel writing isn’t going as well as she hoped and she’s bored. She got a little taste of what it was like to be an investigator again and she misses it. What to do?

Book 8: Hannah’s Hope: A young mother with a troubled past seeks help from Mel and Dana but is their effort to assist her too little, too late?Hannah Yoder appears on Dana and Mel’s doorstep late one night with her teenage friend Katie and Katie’s newborn baby in tow telling the couple the girl and child are in trouble and have no place else to go. Dana and Mel offer refuge for the night and a firm promise to talk about the future. Plans are barely made when first one mysterious tragedy strikes and then another leaving Mel, Dana, Hannah and the Crane and Rossi families with few clues and little hope. Mel knows there’s a killer out there; she just doesn’t know where to start looking. She’s stonewalled at every turn and running out of time. Somebody knows something that will unlock the mysteries swirling all around, but who?

Mel stopped my new Explorer SUV at the Hershberger’s to pick them up. Hannah watched from the back seat silently as Samuel and Rebecca approach and then she slid into the middle so they could take positions on either side of her. They were both resplendent in what was probably their Sunday best……