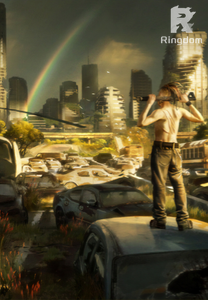 The world fell into chaos after the big powers in the world squabbled over our finite resources, and instead of finding a solution, they fought over them using nuclear weapons, biological weapons, and other means of war. However, ten years after they destroyed nearly sixty percent of our beautiful planet, the earth has recovered wonderfully with plants, animals, and nature in general taking back the land, but we humans that have survived are left to survive in this wasteland. Most of us that were lucky used bunkers and other such places to wait out the war in safety, but those who were not so lucky have been affected by everything that was used in the war, and they are not to be trifled with. One survivor, who has a passion for learning, is very intelligent, a busybody tinkerer, and loves making his own way, has come out to thrive in this new world. His name is V, and this is his story, as it is written by him.

“Oh my gosh! I can’t believe you brought my car!” Sierja squeals running to the car and hugging it.

“That is certainly impressive, you have great taste!” I compliment walking around the trailer pulling my dolly.

“Aww, dude...” ZcJay says in a somber tone walking towards me, “I didn’t want it to be true,” he says giving me a hug while……