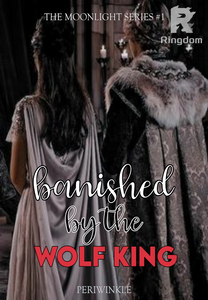 Banished by the Wolf King

“I am impaired, Alpha.”
He chuckled, amused by the words that slipped out of her mouth.
“You are simply cuffed, Kara.” He muttered softly, tracing the engraved designs on the bound on her wrists. “We will take this thing off of you and unleash your strength that has always been hidden inside of you.”
-
Kara Yhres and her family were banished from the Kingdom of Monleite, the realm of the werewolves and she-wolves. Complying with the rules set upon her family, she’s also attached with a magic metal cuff on her wrist and a magic metal collar on her neck that has been attached to her ever since she was born. For years of settling in the Wycca Kingdom—realm of the witches and the warlocks—she grew up being bullied as she was an outcast.
One day, when witches and warlocks were playing tricks on her, a werewolf from Monleite Kingdom found her, weak and fragile as she could be. Alpha Levi didn’t expect to have fallen head over heels for the woman the moment his eyes landed on her. More so, he did not expect to let Kara escape with him from the Wycca Kingdom and onto the Kingdom of Monleite.
It was a dream come true for Kara, to finally settle where she belonged. With werewolves and she-wolves of her own. But still, the magic cuffed on her wrists and the magic collar on her neck keeps her from shifting into her wolf form. As she struggles to fully become a she-wolf and shift, Alpha Levi will offer everything he can in order for Kara to be united with her wolf.
Even if that means using his position in the Kingdom of Monleite. He will do whatever in order to help Kara.
But what would happen if Kara had no idea that she was cuffed and bounded for a reason? Moreover, what happens when she discovers that whatever form she had, it is not something usual in the Kingdom of Monleite.
Would she be an outcast again or would she be a weapon in disguise?

Where she truly belongs.

The rooms and halls were busy.

Almost everyone inside the palace has a task that they need to fulfill. All of the omegas and the servants were busily walking in and out of the rooms……