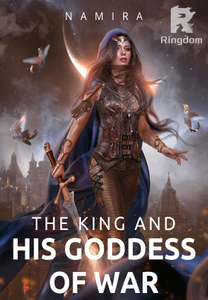 The King And His Goddess Of War

Meet Prince Zuka. A stone cold prince who is going to become King when his father steps down and gives the throne over. Women all around love him because of his handsome facial features and his claimed god- Vargrum, the god of metal. But he only has eyes for one girl, but she is dangerous.

Meet Arianna. A soldier turned Guardian that everyone in the Academy hates because she is too dangerous and powerful. Her claimed goddess is Serria, the goddess of war and death. Serria only claims one child every couple generations, and she was claimed on the day everyone else was claimed. She now works at the castle, protecting the kingdom. But, she keeps having run- with the Prince and every time he's near, she gets butterflies.

In this society, when you turn ten, you get claimed by a god. The elders of the villages bless these children for good fortune. There are many gods to be claimed by, but Serria is one that elders dread and many people are afraid of because of her powers. What happens when the goddess of war gets introduced to the prince?

It's been seventy three years.

I never had children.

I trained an heir like he was my son, an orphan. He was ready to lead, to fight, to rule the country like I had and my father had before me. His name is Barley, the name that was o……