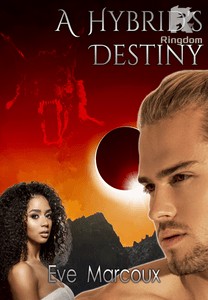 Tate Rawlins’ life has been mapped out for him since before he was born-- literally. A prophecy marking the ‘end of the days’ that named him, the vampire/werewolf hybrid as the only hope for humanity, has left Tate trying to figure out how to stop it. In the middle of that chaos, his sister Nevaeh and cousin Levi had been taken by the very demon who wants to start the apocalypse, and now he must venture into the Underworld with the help of their Lycan mates, Aron and Sébastien, to save them before it’s too late. Tate never wanted his family to get involved in a problem that was all his to deal with, and now because of him, they were suffering the consequences. Because even though his family has helped him, Tate always knew when it came down to it, he would have to take the final steps alone.

That is, until he met and was bewitched by her.

Jaelyn Déchue, the woman tied to Tate’s destiny, his soulmate, is also the one who challenges him, helps him understand what love is, and what it means to live, even though he’d already resigned to the fact that he would most likely die to save the world. Sadly, Jaelyn has secrets that she keeps close to her heart, and is emotionally unavailable. When they realize they need each other to survive, will it be too late?

*THIS IS BOOK 3*
For reader clarity, first read:
BOOK 1: His Beloved or His Mate
BOOK 2: Of Love and Lycans
BOOK 3: A Hybrid's Destiny
BOOK 4: The Knight Prince

After a string of hums, Derrah’s mouth opened, vocalizing an eldritch melody. When her tune grew louder, her skin hummed with a velvety light, building to a near blinding radiance before it exploded from her being and dashed outward to the castle grounds below. It flooded over the knolls in a scouring wave, and Cian watched as it hit Uncle Tate ……