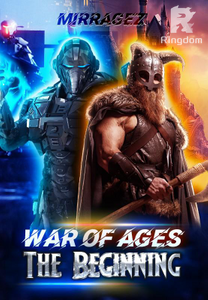 WAR OF AGES: The Beginning

This novel is based on VR games which are in Strategy and RPG setting, not only the player can feel their surrounding they can taste any delicacy in the games, The NPC is able to interact with the player as if they are alive as a real human which can't separate a person from the NPC.

The game has 4 era which is the ancient civilization of Atlantis, Indus, and the Lemurian, Medival that spread from the Asian, European, and Southeast Asia, Modern time which starts from the great war, second world war, and the cold war, as the last age is the Gothic era timeline after the end of the nuclear war and the world had already gone into universe war which has a strange beast and the unknown horror lurk on it.

"War is an endless event and the people inside it see what hell incarnate is like," said anonymous.

“I see… then have Aurel search, Fiery going is with me to the next villages,” says Agus as he looks to Fiery with stern but gentle eyes.

“Yes, master I will leave for a moment and bring the order to her.” Says Fiery as she walks away into the forest nearby and leaves to Aurel’s last known&……