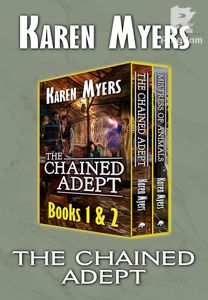 Books 1-2 of The Chained Adept.

MEET A POWERFUL WIZARD WITH UNANSWERED QUESTION--AND AN UNBREAKABLE CHIN AROUND HER NECK.

Have you ever wondered how you might rise to a dangerous situation and become the hero that was needed?

The wizard Penrys has barely gained her footing in the country where she was found three years ago, chained around the neck and wiped of all knowledge. And now, an ill-planned experiment has sent her a quarter of the way around her world.

One magic working has called to another and landed Penrys in the middle of an ugly war between neighboring countries, half a world away.

No one has any reason to trust her amid rumors of wizards where they don’t belong. And she fears to let them know just what she can do--especially since she can't explain herself to them and she doesn't know everything about herself either.

Penrys has her own problems, and she doesn't have any place in this conflict. But they need her, whether they realize it or not. And so she's determined to try and lend a hand, if she can. Whatever it takes.

And once she discovers there's another chained adept, even stronger than she is, she's hooked. Friend or foe, she has questions for him -- oh, yes, she does.

All she wants is a firm foundation for the rest of her life, with a side helping of retribution, and if she has to fix things along the way, well, so be it.

AN ERRANT CHILD WITH DISASTROUS POWERS AND NO ONE TO STAND IN HER WAY.

Penrys, the wizard with a chain and an unknown past, is drafted to find out what has happened to an entire clan of the nomadic Zannib. Nothing but their empty tents remain, abandoned on the autumn steppe with their herds.

This wasn’t a detour she’d planned on making, but there’s little choice. Winter is coming, and hundreds are missing.

The locals don’t trust her, but that’s nothing new. The question is, can she trust herself, when she discovers what her life might have been? Assuming, of course, that the price of so many dead was worth paying for it.