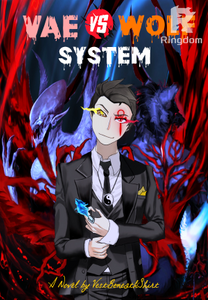 Vaewolf; Hybrid, of Vampire and Werewolf.

When the FAE, creatures of fantasy and long-lost history, rushed out of the depths of the earth, sick of how humanity had destroyed the world, no one had expected it.

Unable to contend against their magic and advanced technology, Humanity was on the verge of extinction. Until, one ambitious man, invented the Fae Serums.

And thus, a new world of Fae Humans was born.

Miles Lykaon was meant to live a life of absolute comfort and power, as the next heir to Lykaon Industries. But when he was still a child, his parents passed away.

Even with his Butler/Guardian watching over him, in order to protect what his parents had left, he was forced to grow older beyond his age.

But he failed, and his inheritance fell into other hands.

Until one fateful night, when two mysterious strangers, monsters, crashed into his home.

He was meant to die, but a ghost saved his life, sacrificing the two monsters in his place.

When Miles woke up, he had been granted a mysterious system, with a strange feature called forms.

And so begins the Legend of the Vaewolf, the Lord of Blood and Shadow, the Huntsman of the Wild.

: h****://.gg/wsGBa4Yzjz
Cover Art: Drawn and Designed by Yours Truly. So expect more art drawn by myself.
Updates: I will do my best to update daily.

This story is inspired by the glitch in Skyrim, and the general coolness of the idea.

A skill supposedly inspired by the ‘soul blood knife’ of the Beast Within, holding the additional effect of Blood Leech.

With 2 BP required per cast, it was supposed to be used ‘one spike at a time,’ a phrase that was mentioned in the skill description itself.……