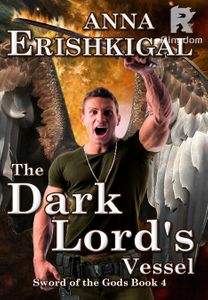 Angelic Special Forces Colonel Mikhail Mannuki'ili has suffered from dissociative amnesia ever since his species was slaughtered as a child. The Cherubim said he must never try to remember the Seraphim Genocide. Whenever he tries, he blacks out and lots of people end up dead. But old ghosts refuse to remain buried. With the village destroyed and whispers the white-winged Angelic is his own Prime Minister, each night, his dead chéad phósadh visits his nightmares to warn him about the lizard at the door.
As Abaddon closes in on Earth, Lucifer deals with the fallout from his recent possession, Gita tries to clear her name, and Ba'al Zebub rallies a new threat against Assur, Mikhail must find a way to rescue his pregnant wife without succumbing to the terrifying power he can wield, but not control.
.
This book is NOT religious fiction!
.
Sword of the Gods saga reading order:
The Chosen One Omnibus (includes:)
—Heroes of Old: Episode 1x01
—Sword of the Gods
—No Place for Fallen Angels
—Forbidden Fruit
Prince of Tyre
Agents of Ki
The Dark Lord's Vessel
The Fairy General (coming soon)
.
Children of the Fallen series
(set in the same universe, but in the modern day)
Angel of Death Omnibus (includes)
—Angel of Death
—Angel of Death: A Love Story
A Gothic Christmas Angel (A Children of the Fallen novella)

Humans: a species that went extinct after an asteroid hit their homeworld, Nibiru, approximately 74,000 years ago. All attempts to reseed humans onto other planets failed and they died out. It is rumored this is the species which spawned the Eternal Emperor, but the Eternal Palace has refused to comment.