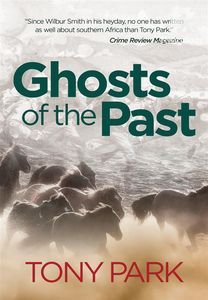 Ghosts of the Past

A forgotten African war. A missing treasure worth killing for.

Intrigued and looking for distraction, Nick discovers a long-lost manuscript which tells how Blake stayed in South Africa after serving in the Anglo Boer War and joined the Nama people in their rebellion against the Germans in South West Africa, modern-day Namibia.

In Munich, historian Anja Berghoff, researching the origin of the wild ‘ghost’ horses of Namibia, stumbles across intriguing letters from Irish-German spy Claire Martin, with whom Blake had an affair.

As Nick and Anja’s paths cross, they find themselves racing through southern Africa and time on the trail of a legend.

But they’re not alone. Someone else is chasing these ghosts of the past, looking for clues to a hidden treasure worth killing for.

Ghosts of the Past is based on a true story.

On a routine anti-poaching patrol, Sean and his tracker dog Benny watch in horror as over-eager rookie Tumi Mabasa is almost killed, and her dog gravely injured, in th……