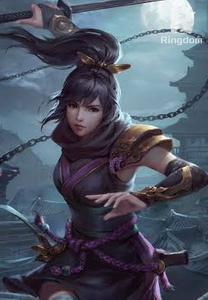 This the Era of the virtual realms, hundreds of virtual worlds made accessible to the human race for their pleasure and enjoyment..... or for their punishment!

Christopher is a biracial young man living in the streets of new Tokyo with his pregnant wife and grandparents. after 11 years of separation from his parents who's bodies were destroyed and conciousness trapped in a virtual mining world for crimes against humanity.

a chance to finally be together with them once again has rose up; Ninjutsu Online! the ninja themed game his parents were sent into as Beta testers with a worldwide release slated for three months away.

now Christopher has a chance to save his parents by working hard and achieving as much as he could within this virtual world to buy his parents their freedom. a good plan, but it seems the people who took them away from him in the first place, will stop at nothing until they put an end to them for good!

now it's more than just fighting to save them....... now it's a war to stop their enemies from succeeding, and for that, he had mercy to give.

I made my way back to the clan grounds without experiencing any sort of problem. It was a rather long day, and while I would really love to log out and spend some time with Diamante, I knew there was no reason to do so. I should just focus on getting stronger for now, Diamante would log into the game soon enough, and then we’ll have all the time……