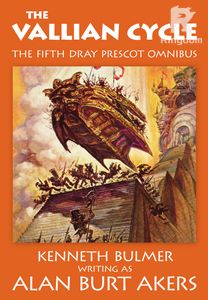 Four hundred light years from Earth, Kregen is a marvelous world, peopled by wonderful beings, filled with light and clamor and furor of life lived to the hilt. But Kregen has its darker side, where horror and terror bind innocent people, where sorceries rend reason, where injustice denies light.Dray Prescot’s happiness with Delia, the Princess Majestrix of Vallia, is threatened as the notorious Wizard of Loh, Phu-si-Yantong, seeks to destroy Delia’s father and take control of the empire of Vallia. And Prescot is determined to seek the whereabouts of his daughters, alienated from him during his forced absence on Earth. But the brilliant world of Kregen under Antares will always challenge Prescot with new problems and adventures. Dray Prescot knows only too well that he must continue to struggle against himself as well as the malignant fates that pursue him in the mingled streaming lights of the Suns of Scorpio.

Golden ScorpioThis edition contains a glossary to the Vallian cycle.

[1] Although a fresh supply of cassettes from Dray Prescot has come into my possession, for which we should thank all the gods of Kregen, I am convinced there are some cassettes missing. Krozair of Kregen finished with Dray Prescott and Delia reunited in the Eye of the World. They must have rescued Didi, the daughter of Gafard and V……