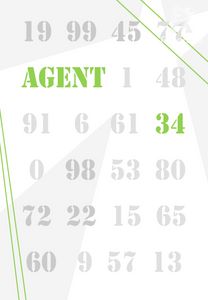 "You're forcing me to work with them and I'm telling you now that I can't do it."

"You've worked with teams before."

"Yeah, but none with a jackass in charge."

They're all a part of the biggest secret agency in the world and they've begun disappearing.

Agents have begun disappearing. Gone without a trace, only to show up weeks later. Dead.

Everly Kingston is the best agent the agency has, and now she's been put in charge of finding the missing agents and preventing more from vanishing as well.

She's forced to team up with another team of agents after one of their team members, Agent 34, vanishes during a mission. And she's none too happy about it. With one overbearing and controlling team leader, one agent who really can't focus, an agent with an all-around bad attitude, an agent who redefines the term bitch, another who's stuck trying to keep everyone from killing each other, and one agent that's best described as a sociopath, this mission is bound to be a disaster before it even starts.

Fortunately for Everly, she's got a handful of friends she can count on to help pull her out of this mess and keep her from killing her new teammates. But this mission just might be the toughest one she's ever had. She'll have to learn to put aside her differences with her new team as agents continue to disappear.

Because it soon becomes clear that the last target, the last agent to disappear, will be her . . .

"Why are we here?" Ian questioned as he looked out the window at the tall building in front of us.

I tapped Sam's shoulder so he opened his eyes to look at me. I pointed to the door, letting him know we were getting out. He hadn't bothered to turn his hearing aids back on and honestly, with Ian's never-ending ……