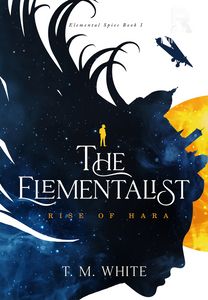 A disgraced pilot saved by elemental magic. A jaded spy haunted by his past. Occult forces threatening to ruin them both.

All Voi wants is to fly her plane and live a decent life, but something stands in her way: emelesia, a rare condition likely to land her in a mental asylum. Forever. Then comes Mr. Callahan, the mysterious agent who convinces Voi to spy for a cure. The catch? She has untapped elemental powers, and the enemy is psychic.

Desperate for a remedy, the aviatrix trains for a dangerous mission, wary of the person she"s being molded into. The threat of coercion hovers constantly: become an elemental agent, or face the asylum. Meanwhile, Voi struggles with unusual side effects—from overwhelming urges to unintentional manifestations of her powers, due to unchecked emotions.

Between learning how to control her abilities, Mr. Callahan"s growing reluctance towards her potential, and dealing with psychic revolutionaries... becoming an elementalist seems less and less appealing. Can Voi and her handler learn to trust one another, or will the machinations of paranormal politics lead to their undoing?

The Man in the High Castle meets Avatar: The Last Airbender in a dark epic of espionage and elemental magic.

The Elementalist: Rise of Hara is T. M. White"s debut novel and the first in the Elemental Spies series.

First, I want to thank my readers for taking a chance on an unknown author and spending time in a world that has become so dear to me. I hope you enjoy this story as much as I do. (And all the sequels to come.)

To my parents, Sarah and Velmond: thank you for allowing me to explore my imagination and for encouraging me to……