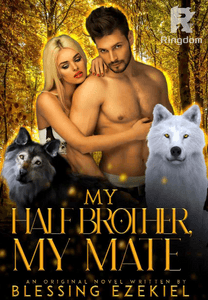 My Half Brother, My Mate

She had dreamt of meeting him, every day of her life she craved to meet her big brother, but she never knew meeting him would be a disaster.


''Mate !'' his wolf howled loudly in his head and just when he was about to make a move forward, his father placed his hands on the shoulders of the little girl and said, '' This is Mia, your half sister.'' those words from his father ceased his steps.


''I hate you, I hate you with everything in me.'' He yelled and took a step forward to me, while I gulped and took a step backward. ''Your mother conspired with my Father and killed my mother.'' he yelled and yanked me to himself. '' I'll make sure you spend the rest of your life paying for their sins and someday when you least expected I'm gonna kill you.'' He declared those words as a promise, ignoring the whimpering of my wolf.

''Why do you hate me so much, I'm your mate for goddess’s sake…'' I tried speaking, but he choked me by the neck and slammed my back to the wall. ''Never, you are not my mate, you are my half sister, my worst enemy and the person I hate the most in this world.'' He yelled with so much disgust.

On the celebration of his eighteenth birthday, alpha Ricardo's life turned around. His father introduced him to a lady and announced she would be his new wife and to worsen it all, she came with a twelve-year-old girl who happened to be his father's child.
The minute alpha Ricardo met her he realized she was his mate, but he kept it away from everyone because to him, it was disgusting to be mated to his own half sister. Just when he thought this was all he could get, he discovered his mother did not die a natural death, but was poisoned by his father and mistress.
Just when Ricardo was trying to process everything, his father and mistress got involved in a car accident and died on the spot, leaving him to care and look after Mia, his stepsister and mate whom he hates so much.
He transferred the hatred and anger he had for his father's mistress to innocent Mia. He showed her nothing but pain and hatred, but little did he know that there were so many mysteries left for him to solve.

''You…you…'' I stuttered in fear and tried to free myself from his grip, but he held tightly to my waist and pulled me to himself, making our chests hit against each other.

''Your hands on my shoulder.'' He ordered in a low, cold tone that sent shivers down my spine. With a gulp, I wrapped my hands arou……