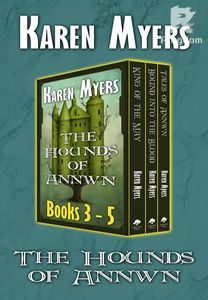 A bundle of books from The Hounds of Annwn - Books 3-5.

MORE VALUABLE AS A WEAPON THAN A KINGMAKER, HE MUST MAKE HIS OWN CHOICES TO SECURE THE FUTURE.

King of the May – Book 3 of The Hounds of Annwn.

George Talbot Traherne, the human huntsman for the Wild Hunt, had hoped to settle into a quiet life with his new family, but it was not to be.  Gwyn ap Nudd, Prince of Annwn, has plans to secure his domain in the new world from the overbearing interference of his father Lludd, the King of Britain.

The security of George's family is bound to that of his overlord, and he vows to help.  But when he and his companions stand against Lludd and his allies at court, disaster overturns all their plans and even threatens the Hounds of Annwn themselves.

George and his patron, the antlered god Cernunnos, must survive a subtle attack that undermines them both.  Other gods and gods-to-be have taken an interest, but the fae are divided in their allegiances and fear the threat of deadly new powers in their unchanging lives.

George and his companions must save themselves if they are to persuade their potential allies to help.  But how can they do so, attacked on so many fronts at once?  Will he put his family into greater jeopardy by trying to defend them?

DISTURBING THE FAMILY SECRETS COULD BRING RUIN TO EVERYTHING HE’S WORKED SO HARD TO BUILD.

Bound into the Blood – Book 4 of The Hounds of Annwn.

George Talbot Traherne, the human huntsman for the Wild Hunt, is preparing for the birth of his child by exploring the family papers about his parents and their deaths.  When his improved relationship with his patron, the antlered god Cernunnos, is jeopardized by an unexpected opposition, he finds he must choose between loyalty to family and loyalty to a god.

He discovers he doesn't know either of them as well as he thought.  His search for answers takes him to the human world with unsuitable companions.

How will he keep a rock-wight safe from detection, or even teach her the rules of the road?  And what will he awaken in the process, bringing disaster back to his family on his own doorstep?  What if his loyalty is misplaced?

Tales of Annwn – A Story Collection from The Hounds of Annwn.

THE CALL: A very young Rhian discovers her beast-sense and rushes to the rescue of an errant hound.

UNDER THE BOUGH: Angharad hasn’t lived with anyone for hundreds of years, but now she is ready to tie the knot with George Talbot Traherne, the human who has entered the fae otherworld to serve as huntsman for the Wild Hunt. As soon as she can make up her mind, anyway.

NIGHT HUNT: George Talbot Traherne goes night hunting for fox in Virginia and thinks about the choices he has made.

CARIAD: Benitoe and Luhedoc are off to fetch horses for the Golden Cockerel Inn in Edgewood. Luhedoc needs to relearn an important lesson about confidence.

THE EMPTY HILLS: George Talbot Traherne shows a bit of the human world to family and friends, hoping to share some of the sense of wonder he discovered when he encountered the fae otherworld.