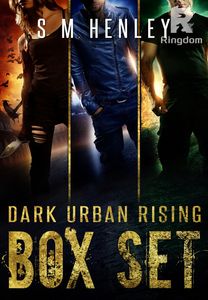 Demons are rising. Cities are falling. Isn"t it time you picked a side?

The heat is rising. Cities are falling. As demons claw their way above ground to take control of a billion human souls, a renegade angel is plotting her own bid for power. Three dare to defy her: a half-vampire girl, a millionaire playboy, and an ex-soldier turned demon assassin. They each have their own desolate paths to follow. But, in the face of ultimate evil, can they come together to stop the angel’s victory? And what of the birds who stalk their every move? Isn’t it time they picked a side?

The complete Dark Urban Rising trilogy contains: Fighting Spirit, Hero Worship, and Raw Deal. The trilogy is a supernatural thriller which takes us on a journey to the dark corners of the world - from Turin to Detroit and back - where demons are rising and humans are fighting for their lives. In urban fantasy style, it digs into the darkness, with not a small amount of blood and gritty humor.

Conn O’Cuinn sat on the battleground surrounded by the corpses of well over a thousand vampires. The rays of morning sun eased over the land, beating the darkness away, each body in its path started to smolder. Soon the whole field would be lit with the fiery remains of the Leeches.

It filled him with so much joy that for a mome……