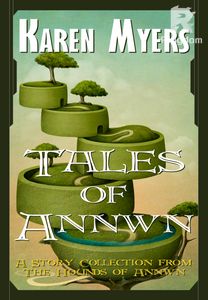 A story collection from The Hounds of Annwn.

The Call – A very young Rhian discovers her beast-sense and, with it, the call of a lost hound.

It’s not safe in the woods where cries for help can attract unwelcome attention, but two youngsters discover their courage in the teeth of necessity.

Under the Bough – Angharad hasn’t lived with anyone for hundreds of years, but now she is ready to tie the knot with George Talbot Traherne, the human who has entered the fae otherworld to serve as huntsman for the Wild Hunt. As soon as she can make up her mind, anyway.

George has been swept away by his new job and the people he has met, and by none more so than Angharad. But how can she value the short life of a human? And what will happen to her after he’s gone?

Night Hunt – When George Talbot Traherne goes night hunting for fox in Virginia, he learns about unworthy men from the old-timers drinking moonshine around the fire and makes his own choices.

Who could have anticipated that the same impulse that won him his old bluetick coonhound would lead him to his new wife and the hounds of Annwn? Every choice has a cost, he realizes, but never a regret.

Cariad – Luhedoc is off with his adopted nephew Benitoe to fetch horses for the Golden Cockerel Inn. He’s been reunited with his beloved Maëlys at last, but how can he fit into her capable life as an innkeeper? What use is he to her now, after all these years?

Luhedoc needs to relearn an important lesson about confidence.

The Empty Hills – George Talbot Traherne arranges a small tour of the local human world for his fae family and friends, hoping to share some of the sense of wonder he discovered when he encountered the fae otherworld.

He’s worried about discovery by other humans, but things don’t turn out quite the way he expects.


EXCERPT FROM THE CHAINED ADEPT - CHAPTER 3

“Stow your gear in the puichok. Hing Ganau will show you where.” Zandaril turned from the horse who was hitched to the side of the wagon and waved vaguely in the direction of a soldier in the process of loading up.

He returned to his task of che……