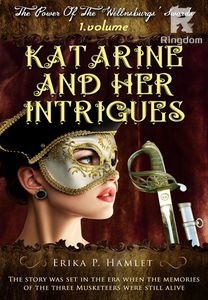 Katarine And Her Intrigues

The novel is from the 17. century, the era when the memories of the Three Musketeers were still alive; humor, intrigues, excitement, the power of friendship and the power of love.

In this series, you’ll read about twins, Christopher & Elizabeth that were born to Katarine and Martrek's. These kids didn't know they were twins, but they were growing close to each other. One as a rich noble kid - Christopher with different name Febien and Elizabeth - poor girl, who also didn't know she came from a rich aristocrat's family because her parents wanted to live their life anonymously from some reason. The Fates - the magical women appeared in the midnight when these twins were born, together with their books of the fates and later these women - Fates will accompany them during their life not letting these kids know who they are these women dressed as nuns. There is a lot of fun in this novel, adventurous, love, desire, intrigue, etc.

As soon as the master of the house appeared in the doorway, applause filled the room and the music started playing a festive fanfare to welcome him. Servants started to fill everyone’s goblets with good wine so that they could have a toast for the two birthdays.

The old Countess joined the Earl as soon as he entered the room, having waited……