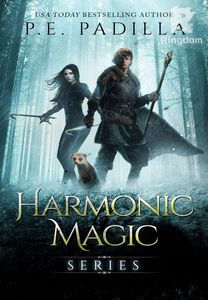 To Gythe and back, with action every step of the way.

See what caused reviewer MJR to write, “PE Padilla's writing is right up there with some of my other favorite fantasy authors, Robert Jordan and Brandon Sanderson” and Wanda M. to write, “Five stars just don’t seem to be enough for these books.”

Sam Sharp didn’t mean to go to another world, but he did. Trapped in Gythe, a primitive world similar to his own but also so different, he has no choice but to journey to the lair of the powerful tyrant, the Gray Man, to wrest from the villain the secret of transporting himself back to his own world.

Joined by a Zouyim monk, master of the magical vibrational energy called rohw, a Sapsyra warrior, and a telepathic creature, Sam develops into a powerful fighter himself through his intense training, all while traveling toward the final confrontation with his enemy. But will it be enough? And if so, what other dangers are waiting in the future?

Follow the adventures of Sam, Nalia, Rindu, and Skitter as they strive to take control of their own destinies, and protect the entire world of Gythe as they do it.

Don’t miss out on the alternate world action. Pick up the boxed set today and see why fans are raving about the series.

Following are words that may be unfamiliar. Some are names, others are terms from Kasmali or of other origin. The syllable in CAPS is stressed. For example, the word apple would be displayed as “AP·pull.” Please note that the diphthong ai has the sound like the English word Aye. Other sounds should be i……