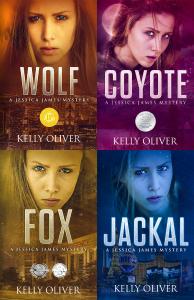 If Nancy Drew drank Jack Daniels... Meet Jessica James.
Award winning author Kelly Oliver is a master of entertaining adventure in these fast-paced thrill rides.
If you like your sleuths fierce, funny, and female, you'll love Jessica.
With more wit than grace, philosophy graduate student, Jessica James, stumbles into art scams, s*x conspiracies, human trafficking, and genetic engineering fraud. With her sexy sidekick Lolita--who's also a black belt in karate--Jessica takes on the Russian mafia, drunken frat boys, and all the bad boys in between.
WOLF, the first in the series, won the Independent Publisher's Award for best Mystery Thriller.
COYOTE, the second in the series, won a Silver Falchion Award for best Suspense Thriller.
FOX, the third in the series, was a finalist for a Silver Falchion Award and a Claymore Award.
JACKAL, the fourth in the series, is a finalist for Murder and Mayhem Award.
ALL FOUR MYSTERIES HAVE BEEN BESTSELLERS ON a****n.
Grab yours now and join Jessica and her posse for hilarious adventures.

Lolita stood up and grabbed her helmet. “Anything to get out of this depressing dump.” She tossed a second helmet to Jessica. “Trouble never travels alone.”

Jessica was surprised to see Leo already had a visitor, a bespectacled girl with flowing curls. Leo had an aura of harmony she’d never seen in him before, obviously due to the c……