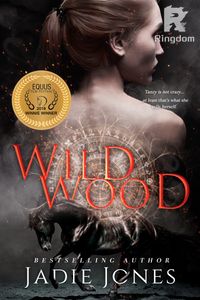 Tanzy Hightower is not crazy. At least, that’s what she tells herself. Crazy looks more like her mother, who studies each sunrise with the same fascination other women give tabloid magazines in the grocery store checkout line. Crazy sounds like the woman on the radio claiming there’s a whole separate world existing parallel to our own. Still, Tanzy can’t deny the tingle of recognition she feels each time she sees her mother standing at the kitchen window, or hears the panic in the woman’s voice coming through the speakers of her father’s truck.

Tanzy intends to follow her father’s footsteps into the professional horse world. But the moment she watches him die on the back of a horse in an accident she feels responsible for, everything changes.

On the first anniversary of his death, a fight with her mother drives her back to her father’s farm in the middle of a stormy night. Neither Tanzy nor life as she knows it escapes unchanged when she is struck by lightning and introduced to a world... unseen, and receives proof her father’s death was no accident.

o strangers seem too willing to help her navigate her new reality: Vanessa Andrews, a psychiatrist who believes lightning chooses who it strikes, and Lucas, a quiet, scarred stable hand with timing that borders on either perfect or suspect. But Tanzy has secrets of her own. Desperate for answers and revenge, Tanzy must put her faith in their hands as her past comes calling, and her father’s killer closes in.