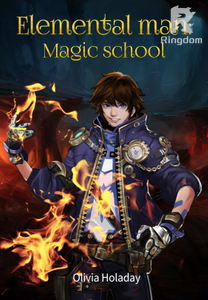 When Larry graduated from high school, he was invited to attend a magic school—Legato College by an unknown old man.

Yes, the college is anything but ordinary, aimed to recruit elemental students and help them tap their potential and grow stronger.

But then Larry found a secret behind his identity. He wasn’t a common person nor an elemental one like his kind. How did this happen? What was he?

When Larry was 7 years old, he discovered he was different from other children.

He was never afraid of the cold and wanted to touch all the flames. He remembered once, when his parents were not at home, Larry secretly lit the flame with a lighter.

The moment his finger touched the flame, it was not pain that he felt but the pleasure of every cell in the body, just like a long-term sore muscle suddenly released, comfortable, and full of power!

After the sense of pleasure, Larry's skin began to radiate light from the inside out, and the golden diamond-shaped lines gradually appeared on the skin, covering every inch of the skin. The dazzling golden light illuminates the whole room, and flames filled the original brown pupils.

Larry quickly got up and took the steering wheel and turned ……