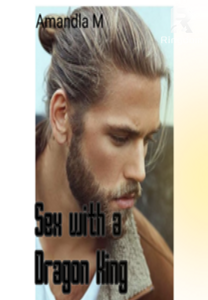 Mate to a Dragon King

Sequel to Making Her Mine.
Matured Content (18+)
"This is Mindless fucking" she muttered, fiddling with the buttons of his shirt.
"Baby we're making love" he mused, flipping her around and slamming her on the wall.
"It will only take a moment" she whined, successfully ripping off his shirt.
"My dragon and I will take you the whole damn night" he growled lowly, tugging down her bra and palming her amazing tits in his hands, noting the sexy orb still threatened to spill from his palm.
He was going to bite it and turn it red....
"I need to get you out of my system" she hissed, wrapping her long legs around his torso.
Damn those thick thighs...
"My system needs to familiarize itself with your body."
"I'm only here for the night" she replied, biting his bottom lip and tugging on it.
"You're mine forever" he declared arrogantly, sweeping across the room and laying her on his bed.
"Claim I'm your mate once more and- oh fuck!"
Her words drowned in her throat as she felt a hot wet tongue against her wetness.
"That's what I thought" Erik chuckled, before dipping his head down once more.
★★★★★★★★★★★★
After being rejected by her mate in a humiliating way, April decides to move on and work on herself.
Four years later, she's back on her feet and is pursuing her Dream of being an author and producer.


Erik Hadrian Drago has searched for his mate for over five centuries. When he finds the fierce and reckless April, he will NEVER let her go.
But what happens when she claims not to be interested and will continue to play the mouse?
Erik likes a challenge, and he will definitely not stop until he owns every inch of her.

I gritted my teeth and sighed before stuffing my face into my cup of coffee.

I knew coming here was a bad idea.

I was supposed to be practicing for my speech tomorrow but I just wanted to see what was going on in the set.

I glanced at a shaking……