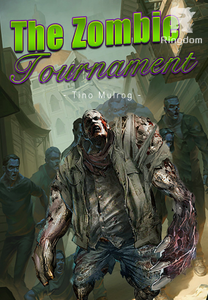 Welcome to the zombie tournament!

Have you heard of zombies killing each other?

Minopia Kingdom held a competition for zombie enthusiast and survivors alike. For the prize, they offered two billions of dollars or a cure for your significant other. Not to survive against zombie like any other run-of-the-mill competition, of course, but to use a zombie to become a brawler for you instead.

Think about it, you have a zombified father in your disposal. By using Minopia's cutting edge machinery, you can control them to follow your orders for killing people and the other zombie at the same time! Don't be afraid of them, because their body will be your money in return!

Rather than running away from them, what if you can use their unique abilities to win a battle? There are lots of them in the wild. Spanning from a gigantic zombie that has more than 3 meters in height to the magician zombie that could use the mystical arts with ease, there are a lot of zombie species in this game. For you deadbeat collectors, this is truly a game to play with.

Yes, you can also modified their useless limbs to be more deadly in battle. You want to put a machine gun on your zombie? or a rocket launcher, even? call a blacksmith, and your wish will be granted in seconds!

“You have agility, I have to admit.” Juno Rumondor praised,”I have myself entertained in fighting against you, really.”

“Pleased to make acquaintance with you, too, Juno.” Zeno Gunnar answered in brief.

His eyes never strays out from the two scimitars before the black ones, dancing shyly to oppose streams of s……