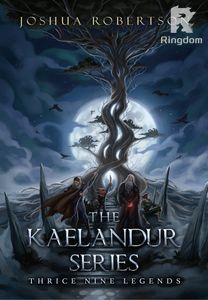 Meet Branimir Baran, the slave destined to save the world.


Bran is a Kras, a race enslaved by the Highborn for generations. He witnesses the forging of the forbidden dagger, kaelandur, created to execute Nedezhda, a Highborn found guilty of practicing death magic. But Nedezhda rises again with a horde of demons, leaving Branimir and his companions to seek out the Tree of Life with hopes of stopping them from destroying it. Over a thousand years, the looming threat grows to extend across all lands. When Branimir hears the dead are spilling over from the Netherworld, he not only realizes kaelandur may have a greater purpose, but also that the desires of the gods are incongruent with the interests of mortals. Against all odds, he is left to protect the magical dagger or leave the whole world to fall to ruin.


While the first ennead of books in Thrice Nine Legends can be read separate of one another, the following is the chronological reading order for full enjoyment.


Anaerfell, The Blood of Dragons, Book 1


Warden of the Ash Tree


The Name of Death


Heshayol, The Blood of Dragons, Book 2

The chains at his wrists and ankles unfastened and fell away from his decaying skin. Smoke roiled from his lips. With satisfaction, he lifted his hateful gaze to the Likhyi eddying above them as a storm cloud might.

Svathevit spoke in Branimir’s mind with the dominance of the divine. ‘Svarog has given way for Kowin the Deathless to stay th……