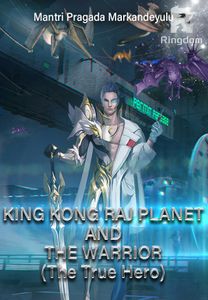 KINKG KONG RAJ PLANET AND THE WARRIOR (The True Hero)

This is a Scientific-Horror-Thriller-Suspense-Death-Rebirth-Ghosts, Aghoras and Entertainment Story with Looting, Club, Pub, and Horse Race)

Flash back story: This was One Decade (1,000 years back memory story) KING KONG RAJ at a small Pla existed near to the Heaven.

DR. Vishal' a mind went back to his previous life. He was getting thoughts in his last life. He was one amongst other teammates fought agat the evil things on a separate World called "King Kong Raj" a separate physique and big personalities, where all bad evils exist. Those days were such that they used to fight with Swords, Daggers and Sharp Edges Special Weapons. Vishal and his team members were very good in Sword fighting, Wrestling, boxing, brave and bold in attacking all the bad evils and elements. Those days were different. Vishal was with a good heroic physique. Vishal alone used to handle even 50 to 100 elements. Even King Kong Raj evils and elements attack others, Vishal used to bravely fight with these elements. Vishal was so dynamic. Many supports came to the rescue of Vishal in fighting with King Kong Raj evils and elements. Slowly Vishal and his team used to damage and destroy these bad elements one by one and used to gain an upper hand.

KING KONG RAJ AND THE WARRIOR,

This is a Scientific-Horror-Thriller-Suspense-Death-Rebirth-Ghosts, Aghoras and Entertainment Story with Looting, Club, Pub, and Horse Race)