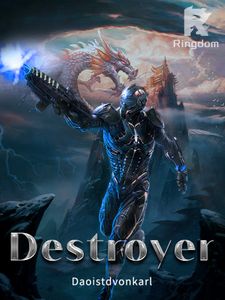 The main character, Philip Mark, is an elite professional player of an FPS game called, Destroyer.

The game Destroyer is a fast-paced first-person shooter game, with RPG elements. Philip Mark a 24-year-old college drop out has made this into a professional career. Where he has been the champion for three straight consecutive w.

But during his 4th championship game, Philip Mark suddenly had a heart attack. But as Philip's body dropped dead, he was also awakened in another world, which seems to be ide a catacomb.

“What is this place? Why is it dark? Why does my body feel heavy? Where am I?”

When he looked at his hand, he saw the same hands, of the characters he was used to seeing on his screen. “What the f**k is this!?”

Philips Vision was suddenly obstructed, which seemed to be a HUD, showing him a crosshair, a minimap, HP status, and a 2D miniature figure of the Destroyer armor. Then a message board appeared in front of him saying,

“I' am God and you have been transported to another world, where fantasy creatures and magic exists. You are now ide a body, of an Armor that you loved to t*****e, in the virtual world.”

“I brought you here, for a mission, but you will have to discover that for yourself. But It would be boring if I cut to the chase, so Peace!”

So beg our MC's adventure in another world.