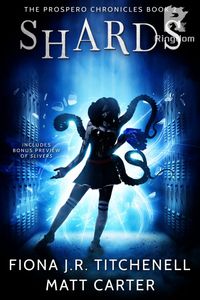 When autumn descends on Prospero, California, Ben hopes the normality of the new school year may offer a reprieve from the town’s paranormal horrors. Mina knows all too well that there are no reprieves and no normality to be had in Prospero, but even she can’t prepare for what the coming year holds.

On top of the vivid hallucinations that have plagued Mina since the attack on the Warehouse, and the brewing Splinter civil war that threatens all of humanity, ide the walls of Prospero High, Ben, Mina, and their expanding work face a vicious campaign to destroy their friendship, and a mysterious assassin picking off human rebels – an assassin with powers like no Splinter they’ve fought before.

Ben and Mina’s one hope rests with a mysterious old man hiding in the woods outside of town; a living legend who may be able to teach them how to fight this dangerous new breed of Splinter. That is, assuming he doesn’t kill the pair of them himself.

“Titchenell and Carter hold nothing back in this solid sequel that thrills and expands on its predecessor. Aided by swift writing, relatable characters and unexpected scares, Shards is a chill-inducing delight.” —David Powers King, co-author of Woven.

“Maintaining the same level of popcorn-munching fun, Titchenell and Carter are taking The Prospero Chronicles in a promising direction.” --Joe Dell'Erb, Washington Independent Review of Books.