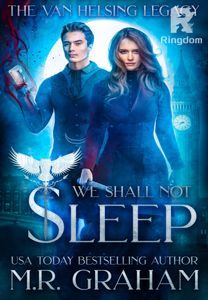 The Van Helsing Legacy: We Shall Not Sleep

The Great War is over, its fires quenched. The guns are silent. The Dead are waking.Meg van Helsing grew up with a book in one hand and a wooden stake in the other, a crucifix always around her neck. But the world has changed, and the monsters she hunts with her friends are less frightening than gas burns and shell shock. The ghost of the War looms darker than Dracula’s shadow.Until the night one of her friends disappears.Now, they are under constant attack, beset by the blood-hungry corpses of un-dead soldiers at exactly the moment another monster appears: an incubus, lethally attractive. The young man offers help, and Meg wants to believe him. If only she could convince her friends she is immune to his spell.Someone wants them dead at any cost. The answer lies in old books, dark sorcery, and a secret kept for twenty-five years, written in blood. If Meg wants her friends to live, she’ll have to open her eyes.

I don’t think I need relate the tedium of wrapping the whole thing up.

It nearly proved impossible to disable Quincey rather than killing him, but in the end, between the three of us, and with the help of Lucy and Mr Martin, we bound him with heavy twine soaked in holy water. We called for the Academy, and the raging ……