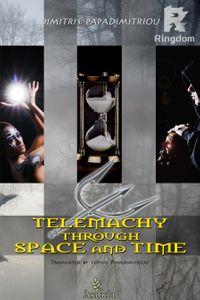 Telemachy through Space and Time

Telemachy through Space and Time is a spatiotemporal fantasy fiction with new age characteristics, which refers to dreamlike journeys with a strange connection to reality. The lead character, a bourgeois, Telemachus Andronicus is overweight and works as a clerk in a bank. He learns that he has cancer and has six months left to live. He feels alienated and finds a way out in the complex world of dreams. He is experiencing incarnations in prehistoric (antediluvian) times, in ancient Greece, the fall of Constaninople, siege of Messologgi, the French Revolution, the Second World War o and he travels in other dimensions as well. Common thread of his travelling is on one hand a dark swamp which is an animate evil entity and on the other hand a black dressed man with unearthly mystic powers, who’s been persecuting him ever since. Soon the reality and subconscious are beginning to mingle in his sleep, putting his mental stability to the test. The only person who seems to believe in him is a strange, enigmatic and beautiful woman, who knows more than she lets out. In each of his incarnations he encounters different experiences which although seemingly unrelated, they become the key to unlock the ultimate truth at the end.