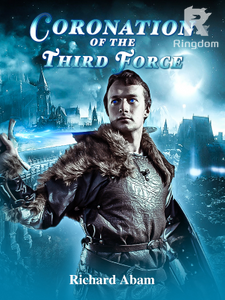 CORONATION OF THE THIRD FORCE

Third Force, who is Prince Jokhara, reincarnated to revenge the callous murder of his family perpetuated by King Agorim to whom he was reincarnated to as his lost son, the authentic Prince Jokhara of the kingdom of Water who went missing. The reappearance of his lost son brought him joy but unknown to him, the avenger of his murderous deeds has reappeared as his forever lost son to exact his revenge on the king and his nobles who conspired with him to perpetuate the evil deed.
The three kingdoms of Water, Sun, and Wind are eternal rivals that never agree together until they were attacked by a superior enemy, an alien kingdom. For these warring kingdoms to survive, they had to unite and fight as one agat their common enemy, and for this to happen, they entered to a combat challenge to be fought by the three princes based on a thirty o code combat system wherein the winner will be crowned the emperor of the universe and ruler of the three kingdoms and then lead them to fight and defeat their enemy.
Wherein the three Princes, Radia, Bosakia, and Jokhara, all equipped for the combat acquired the powers necessary for combat including magic, abilities, and skills fitting for a combatant. But the protagonist, Prince Jokhara, courtesy of his reincarnated personality has an edge over his rivals and though his rivals were never easy to defeat, he triumphs over them in the end despite he was ridiculed as a weak prince overprotected by his father and nicknamed as the third force.. The adventurous combat challenge saw him emerge as the supreme hero of the universe to be coroed as the emperor of the universe.