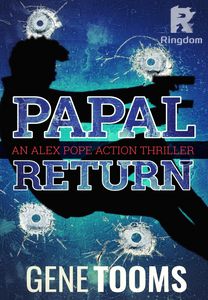 They’re the least of each other’s problems.

What's the difference beeen a hit-man and a recovery agent? One is paid to kill the target. The other is supposed to bring the target in alive. For the recovery agent, mixing the o could be extremely bad for business...

After a seven months hiatus, Fugitive Recovery Artist Alex Pope is contacted about a simple but extremely lucrative job. A job right in his backyard. Something 'straight-forward' that would get him back in the groove of things. At least, that’s what it seems like when he takes it on.

So far, Pope’s recovery record has been impeccable, his prowess near legendary…but if he’s not careful, this ‘simple’ job could be the one to sink him.

In more ways than one.

This is Book 1 in the no-frills new Alex Pope Action Series.

MY FACE LIGHTS UP IN pain as a big hand slaps me across the face. The thwack! echoes off the walls. It stings. It takes a few seconds for my eyesight to come back, alternating between a black fuzziness and a spray of yellow and white dots swimming in space.

My mind slowly adjusts as I try t……